Back in 2001, western Maryland was a location shoot for the Ted Turner produced major motion picture, “Gods and Generals”. 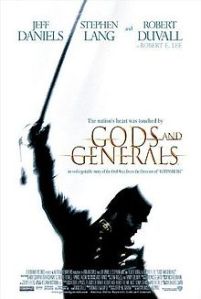 I’m sure many people remember the news of the filming taking place around the area and some may even remember the premier held at the Maryland Theater.

But what many may not remember is that The Hope Center was actually used as a location shoot for the movie!

The film crew descended on our property in the early morning hours one Sunday. The Hope Center, known as the Hagerstown Union Rescue Mission at the time, was to be the streets of Richmond for a storyline following infamous actor, John Wilkes Booth.

The scene is set as John Wilkes Booth, played by Chris Conner, walks out of a theater

in Richmond to a group of fans congregating in the street. The building next to the “theater” was a Confederate Army recruitment center. As John Wilkes Booth leaves the theater, he proceeds to address the crowds gathering in the streets before entering a building. 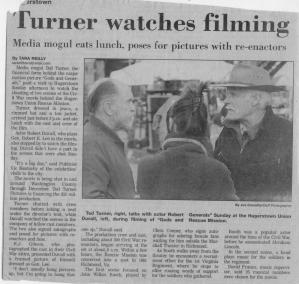 The day of filming was quite exciting. The Trinity Center, our multi-purpose building just across from the sorting building,  was used for wardrobe, make-up and craft services. In addition to the actors and extras present for the scene filmed, actors Robert Duvall (Robert E. Lee) and Stephen Lang (Stonewall Jackson) visited the set.  A surprise guest, Ted Turner, was also present during the shoot.

The theater in the movie is actually the donation drop dock of our sorting building and the kitchen side of our main building was used as the Confederate recruitment center.

Today, you can still see a bit of Hollywood history on the side of our sorting building. 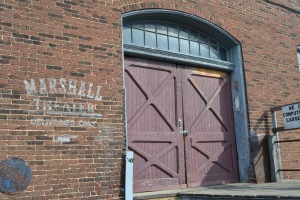 Just to the left of the doors at the dock is a faint, white painted sign reading, ‘Marshall Theater – Deliveries Only’.

The John Wilkes Booth storyline was originally cut from the movie. Theater audiences didn’t see the scenes filmed at The Hope Center. The film was recently re-released as an extended director’s cut on Blu-ray. This extended cut features the scene filmed at The Hope Center. You can pick up the Blu-ray version at stores that sell Blu-ray dvd’s as well as Amazon and other online retailers.